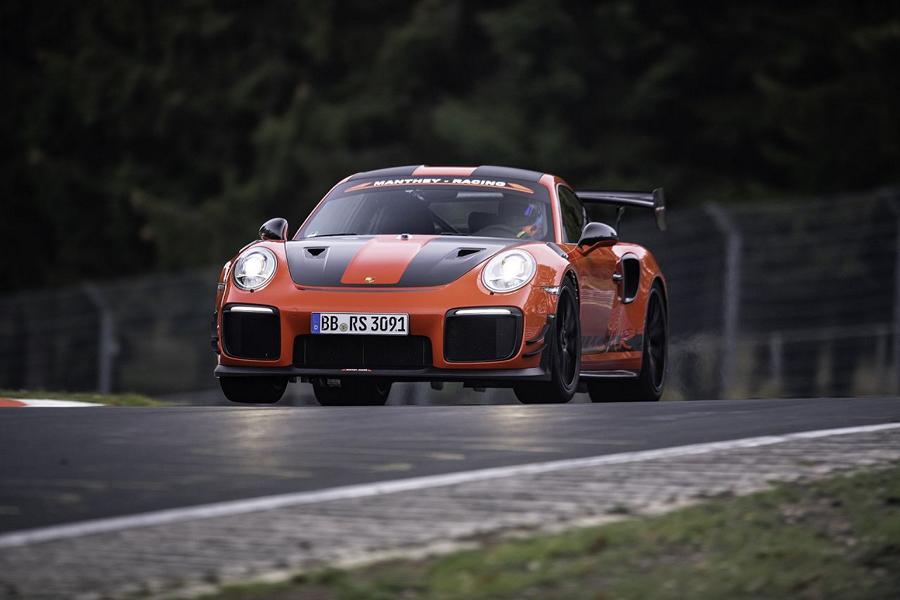 Yesterday, we told you about a fantastic Porsche 911 GT3 RS created by Manthey Racing. Today, let us take a closer look at the model it was based upon: the extreme 911 GT2 RS MR.

In November 2018, the modded ride managed to set a new official Nürburgring record in the production car category by lapping all of 20.6 kilometers (12.8 miles) in 6 minutes 40.3 seconds. The most impressive bit was that driver Lars Kern and his crew avoided modifying the engine or drivetrain in any way, restricting all modifications to the ones related to aerodynamics.

The team came up with a new all-carbon body design for the race, which they produced with some assistance from Porsche and third party vendors. The racer ended up with an enormous rear wing, a diffuser, a rear engine cover, carbon mounting brackets, flaps and air vents. The underbody was also replaced with a carbon-fiber sheet optimized for airflow distribution. The suspension became harder, the brakes stronger, and the wheels lighter.

As a result, the optimized GT2 RS has completed the North Loop full seven seconds ahead of its production version – quite a breakthrough, considering the challenges associated with squeezing extra seconds from the already maxed-out vehicle performing at peak capacity.